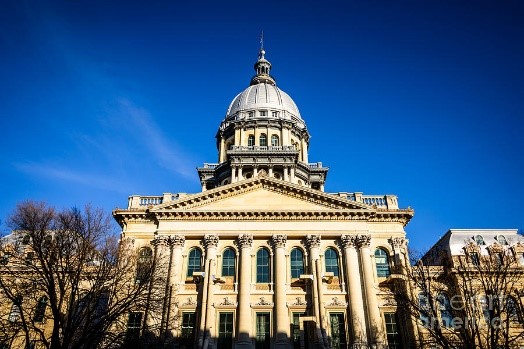 CHAOS in Springfield from the Democrat Majority

Last week in my weekly email, I noted that there were five particular issues that I felt the Democrats may bring up or deal with during VETO Session this week. Some of those issues I hope never come up for debate such as the Repeal of Parental Notification. But other issues like dealing with our massive $4.3 billion debt to the federal government for IDES should have been debated and forward movement taken to pay it down as we accumulate millions in interest costs on the debt.  Instead, the Democrats were paralyzed, directionless, and obviously unable to govern this week.  What did happen is the courts, handed Governor Pritzker and every Democrat Senator and Representative, a stunning and biting rebuke for passing redistricting maps that were blatantly politically motivated and unconstitutional.

Not wanting to go be forced to have maps drawn by a bi-partisan commission, required if there is no map by June 30th, the Democrats used faulty population data to pass bad maps in May which Governor Pritzker signed.  After receiving the actual census data and knowing that the May maps were wildly out of balance, the Democrats drew new maps in August and passed those into law.  Those August maps are now in a court challenge too.  The courts have told the Democrats to stand down and are allowing opposition parties, the Republicans and a Hispanic group that challenged the maps to offer amended maps for consideration by the court.  In the wake of this rebuke this week, no other work was done.  Taxpayers spent thousands of dollars needlessly to have legislators twirl their thumbs while the Democrat majority figured out their next move. Read more here.

Let’s Get It Right

I joined my Senate Colleagues last week in a press conference about their public safety reform package.  A set of bills was introduced in by Republican Senators in October to correct the unworkable bills passed by the Democrats in January and in the Spring.

The Democrats’ legislation, signed by Governor Pritzker made it easier for felony arrestees to stay out of jail and more difficult for police officers to safely do their job.  The Senate Republican’s public safety package includes eliminating good time for weapons offenses and attacks on law enforcement officers, getting serious about gun crimes including mandatory minimum sentencing, and juvenile court, bail, and mental health reform.  Read the specifics here.

Head’s Up – A Troublesome Bill in the Senate

HB3173 is a trailer bill to HB3223 which passed and was signed into law earlier this year.  The follow-up bill may be a backdoor way to escape parental notice of abortion using the school “confidentiality” laws that are now in place.

To be clear, my position is that anything that any school personnel knows about a child, a parent also has a right to know.  There should be nothing kept from a parent and if abuse is occurring then other authorities need to be called into the conversation.

Back to HB3173.  According to independent analysis, the current new law (HB 3223) allows, among other things, a pregnant minor girl in public school to have various “valid causes” for being absent, and therefore not truant.  This “valid cause includes a “medical appointment” (which could include an abortion). Normally, if a student is absent (or truant) without cause, the parents are called to find out why. This section allows a girl to be absent and not be called truant and parents not called.

HB 3173 as amended, adds confidentiality requirements to a “qualified employee” to keep information confidential from a parent if that employee decides that it is not safe for the child to have her parent(s) told.  We understand that an unsafe situation can be sexual violence or sexual abuse by the parent, but the employee (counselor, etc.) makes the call on what is safe in all situations. Thus, a pregnant girl could say “My parents will “kill me” or “will throw me out of the house” and an employee could say that makes telling the parent “unsafe.”  Additionally, in floor debate, it was brought out by Sen. Rose that if disclosing such risk does not require disclosing confidential information about a student’s status, then the student’s status must NOT be notified which would negate telling the parents.  Also, the confidentiality section is messy, there is no statutory part of this bill that tells a “qualified employee” (counselor, etc) what is unsafe, so it would be up to the employee to decide if a parent should be notified.

I also want to highlight the Republican Senate Women’s Press Conference on this topic. Listen HERE.

We’re Not Going to Take It

Numerous lawsuits were filed against the Governor, Illinois Department of Public Health, Illinois State Board of Education and local school districts against Executive Orders on Masks and unlawful quarantine procedures.  The 145 lawsuits encompass school districts across the state.  From the Cook County Record:

Parents of school children from the Chicago area and throughout Illinois have sued nearly 150 Illinois school districts and Gov. JB Pritzker, among others, asserting their children’s rights have been trampled by rules requiring their children to wear face coverings while in school, or to be forced to stay home from school, out of suspicion they may have been exposed to COVID-19.

State Legislature Continues Remote Voting Through the End of the Year

In June, the House approved on a partisan vote the ability for legislators to vote remotely via the internet.  Let’s be clear, most members are still showing up in person to conduct the business of the people, so this has nothing to do with protecting anyone from COVID.  This has to do with convenience of members.

This week the only bill that the Illinois House passed was a bill to extend the remote voting option to the end of the year.  I am opposed to remote voting.  Members should be at the place of work in order to have meaningful conversations and debates over important public policy.

Lawmakers were tasked with reducing the number of Illinois congressional districts from 18 to 17 after the 2020 Census confirmed Illinois experienced heavy waves of outbound migration. The 2020 Census was the first Census in over 200 years in which Illinois lost population.

If implemented, the new map would most likely yield 14 Democratic and three Republican districts. Republicans and public redistricting reform supporters are heavily criticizing Democrats for drawing what they said is a state legislative map designed to protect incumbents as well as ensure a Democrat majority in the U.S. House of Representatives in the 2022 midterms.

Police officers, prison guards and airport-security workers are among the public-safety employees resisting COVID-19 vaccines, with showdowns over the issue in the works as deadlines to get the shots arrive.

“All I can tell you is, if we get a large number of our members to stand firm on their beliefs that this is an overreach, and they are not going to supply the information in the portal, or submit to testing, then it’s safe to say the city of Chicago will have a police force at 50%, or less,” said the head of Chicago’s police union, John Catanzara.

The Transportation Security Administration says four-in-10 of its employees — including screeners — are not vaccinated against COVID-19 as a federal deadline looms. Civilian federal government workers must be fully vaccinated by November 22, the Monday before Thanksgiving, one of the busiest travel times of the year.

The system will not function if 50+ million American workers stand united against the vaccine mandate.  It really is that simple.

As you have likely heard, a rise in the price of gas is leading to predictions of high home heating bills this winter. I am sharing the below resources to provide you with answers and assistance, as well as legislation I am looking at that would address an underlying driver of higher gas utility bills.

Why gas utility bills will be high this winter

The price of gas, as a global commodity, is impacted by many different market conditions. After dropping because of the pandemic, demand for gas has increased faster than supply. The February 2020 cold snap and impacts of Hurricane Ida have also contributed to higher gas prices.

The cost of gas could be roughly twice as high between November and March as it was last winter. Crain’s Chicago Business estimated that this alone may lead to 35% higher bills for Peoples Gas customers and 48% higher bills for Nicor Gas customers. Customers of other utilities should expect bills to rise by similar amounts. Energy burdens disproportionately impact many communities and have health and wellbeing impacts beyond immediate financial challenges.

While higher commodity prices explain the sudden jump in bills, Illinois gas utility customers have been paying higher and higher rates for gas delivery in recent years – increases that come more quickly because of a surcharge on Ameren, Nicor, and Peoples Gas bills that the legislature has the power to end.

Immediate resources are available to customers

Low and moderate income customers may qualify for bill assistance through LIHEAP, PIPP or through utility managed assistance programs. Customers should go to www.helpillinoisfamilies.com and contact their utility directly for more information and to apply. Customers should also consider the Illinois Home Weatherization Assistance Program (IHWAP), which helps low income residents and households reduce energy costs by making their homes and apartments more energy efficient.

More information is available at: www.citizensutilityboard.org/welcome-cubs-help-center

Since the Illinois legislature passed a law in 2013, Ameren, Nicor, and Peoples Gas have used a special bill surcharge to accelerate infrastructure spending that is immediately and automatically added to customer bills. The surcharge is contributing to significantly higher delivery rates at all three utilities and should be ended. Legislators were told the average Chicago gas customer would pay $1.14 per month; average customers were paying over $13 in June. Nicor is on track to finalize its third rate hike in four years – fueled significantly by the surcharge – by the end of the year.

We Are Here To Serve You!

As a state representative, my office is available to assist you with any issues you may have when interacting with a state agency. Whether you need help with unemployment claims, getting a FOID card, renewing your drivers license or resolving a tax problem, we are here to serve you.

Oftentimes, some of the best legislation comes from people who see where the law is unworkable or simply unfair.

If you have ideas on how the state of Illinois could improve, let’s sit down and discuss if a legislative fix is needed.

Did someone forward you this email? You can receive your own weekly updates here.